This blog serves as a personal alter for eviscerating and laying bare the entrails of that overabundant local ruminant, the bovis sanctus siccus –the temperate sacred cow. It’s a messy job on a good day. But given the distended fecal sacks of our holy bovines, retching is not uncommon.

Has Scamcouver been successful in this regard? Probably not: at the end of the day there’s not much to be said about a slab covered in offal.

However, the audience for the gory spectacle is growing. In 2013, followers are up four-fold and readership has grown by a factor of five. There’s something of a world-wide audience, too. While the vast majority of readers are Canadian residents, Scamcouverites could be found in about 70 nations, from Albania to Viet Nam, from Iraq to Italy. The top ten non-Canadian sources are:

Thanks for your interest and support -especially Lindsay. 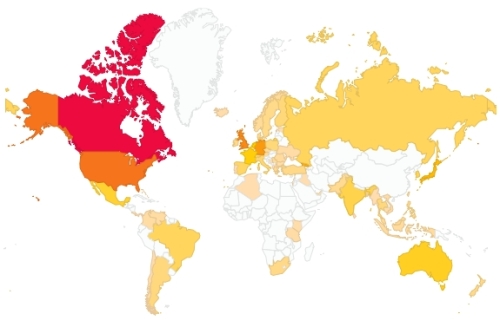 “Chimera” (an imaginary monster comprised of grotesquely disparate parts; a fanciful mental illusion or fabrication) was the most popular search term driving traffic to the blog. Some others:

But a few of the entertaining comments received:

From Boom, in response to The Cringe: It’s You … Vancouver: “It’s you that makes me shit my pants on the skytrain. It’s you”

From Sister Jake, in response to The Worst of Vancouver Survey: “But i love vancouver! where else can you ski in the morning, play golf in the afternoon, and shoot up after a raw food dinner?”

From Ksk, in response to Welcome to Vancouver: “Truckers were considerably thinner in the 1970s.”

To be eligible for “Scammer of the Year,” candidates must have been character assassinated in this blog’s “Scammer” category at some point over the course of the preceding 52 weeks. Candidates are judged for their ability to present themselves as stalwart citizens while simultaneously deforming the local psychogeography for their personal enrichment; extra points are awarded for overall douchebaggery. The winner will be notified of their victory by poison pen letter, which will be accompanied by the cash prize comprised of whatever Canadian Tire money I happened to have pinned to my refrigerator. A likeness of the winner will be installed in a future “Strip Mall of Shame” -development permit still awaiting City Hall approval.

The candidates for the second annual Scammer of the Year award are:

For his tireless effort to shill for the real estate industry that pays his way, and the shear ridiculousness of his title, I declare Tsur Sommerville the 2013 Scammer of the Year. [Yawn]

Friends, the alarums have sounded. The New Year will immediately bring 439 Powell and the Hollywood challenges, and many others great and small. And then there’s a civic election ahead. I hope for the sake of our community that seizing the reigns is not a task beyond our grasp. I resolve to double my efforts, to dig deeper, to cut through that swollen fecal sack, if necessary. It’s a messy job and I hope see you there.

You're welcome to leave a reply Cancel reply